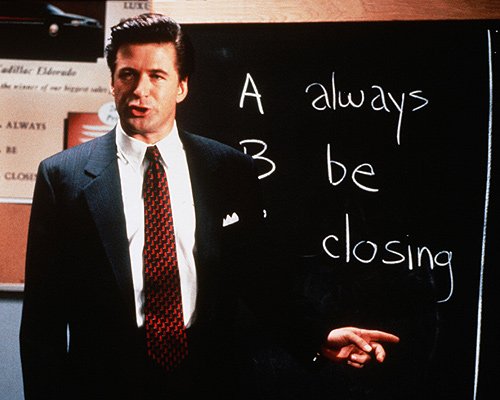 Filmmakers have romanticized the sales profession time and time again. Cinematic portrayals have deified, humanized, vilified and lionized the psychological interplay between buyer and seller since the medium was invented.

With everyone stuck at home waiting for this tragic pandemic to subside, it's a good time to binge-watch some classic movies in the comfort of our homes.

We've compiled a list of some of our favorites. Feel free to reach out to us and add yours!

Over the course of the series, viewers are reminded over and over again that Michael Scott, Dwight, Jim, Phyllis, Stanley & Andy make up an incredibly effective B2B sales team. Their work as hybrid field/inside salespeople ensure that they staff the only profitable branch of fictional company Dunder Mifflin.

Usually, films and television like to portray salespeople as conniving, silver-tongued fraudsters. When they are the main characters, they are generally anti-heroes or the story is one about redemption from moral bankruptcy. The US version of The Office does not take this approach. The salespeople portrayed here are sweet, not sinister; and goofy, not greedy. The reason for their success?

They care about the customers they work with.They always try to add value and they establish genuine, strong relationships with them. This is why their clients choose them over their counterparts.

All moments of camaraderie, dysfunction and bustle are given equal time in the spotlight. This honest take on the modern American workplace milieu is one of the reasons why it's the most streamed programon Netflix.

Sales professionals at all levels can know that management often utilises role-playing to keep their team sharp, so Michael Scott’s sales trainingshould leave a big impression. Another classic moment highlights just how much of an impact quality leads can have on a high-performing sales organisation.

Martin Scorsese and Leonardo Dicaprio team up to produce this modern classic based on Jordan Belfort's written testimony of his time spent as a freewheeling 1980's stockbroker.

There is a reason why this film is Scorsese's highest-grossing box office feature. Viewers are riveted by Dicaprio's effortlessly charming portrayal of Jordan Belfort, whose money-hungry journey takes him from the son of a middle-class accountant in Queens to leading the high-performing brokerage Stratton Oakmont on Wall Street.

Based on the memoir of the same title, the film chronicles Belfort's journey as he builds an empire with little more than his talent for communication and an ability to inspire his colleagues. The audience understands that Belfort operates on the wrong side of the law (though detractors claim not nearly enough) but nonetheless is dazzled by his brazen ambition and willpower.

Hollywood loves redemption stories about stockbrokers in New York and this cult classic delivers the goods.

Ben Younger based the film off of 2 years of research he conducted within the world of underground brokerage firms, better known as "chop shops". The film follows Seth, a Queens college dropout with entrepreneurial ambition in spades, as he joins one of these chop shops and makes his mark within the sales floor "boiler room" peddling expired or fictional stocks to investors in order to create artificial demand. By the movie's conclusion, Seth's conscience eventually overwhelms him and he works to make whole again the investors he has helped scam.

Before then we watch a kid barely out of his teens elevate himself from college dropout to a brutally effective stockbroker.Purely with his ability to communicate a (fictional) vision that mesmerizes his prospects into making significant investments into speculative stocks. 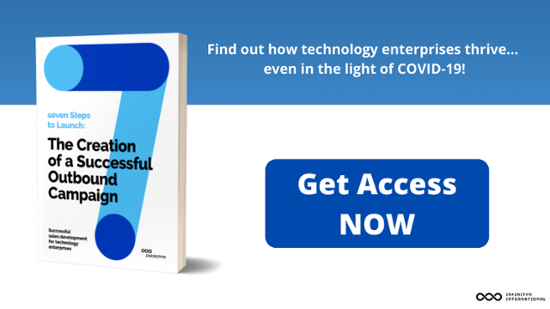 Alec Baldwin's "ABC" speech has reigned for quite some time as the greatest cameo in film history. Even people who haven't watched this scene can quote at least a few lines from Baldwin's searing monologue. For others, like the characters in Boiler Room, it's gospel to live by.

The film highlights the immense pressure that salespeople often face when trying to "get them to sign on the line which is dotted".

An exchange from Baldwin's spiel that deserves some consideration starts at 2:17:

Alec Baldwin:You got leads. Mitch and Murray paid good money. Get their names to sell them.
You can’t close the leads you’re given, you can’t close shit, you are shit, hit the bricks pal and beat it ’cause you are going out!

Levene: The leads are weak.

Alec Baldwin: Fuck you, that’s my name. . . Because only one thing counts in this life. Get them to sign on the line which is dotted.

While this is an iconic speech, Alec Baldwin's character should have taken a moment to listen to the sales team's feedback. Eventually, viewers come to understand that he doesn't underestimate the power of quality leads, since he unveils a stack of them in a neat bow-tie and brandishes before his captive audience. "These are the new leads. These are the Glengarry leads. To you, they are gold. And you don't get them"

The leads, of course, only go to the top salespeople, which are not the ones that Baldwin is berating in the clip.

So what happens? Two of them conspire to steal the quality leads and sell them to a competing company.

The lesson is clear: if a sales organization is having trouble converting leads into opportunities and then closing them, the leads might actually be weak. It would be a disservice if management doesn't work towards understanding why the leads are getting stuck in the funnel.

Will Smith playing Chris Gardener is inspirational. It's a refreshingly positive spin on the stereotypical portrayal. The film is based on Gardener's memoir, which he wrote long after he had stopped sleeping in public bathrooms and had set up a successful brokerage.

This film is set while he's transitioning from a career peddling medical technology that nobody wants into his first steps as a stockbroker.

"Dial high" is the sales lesson that many take from this movie. As Gardener works his way through the 6 months unpaid training program at brokerage Dean Whitter, he finds that it's a lot more efficient to start at the top of the call list, as opposed to working up from the bottom. Through the sheer force of will and a willingness to work at the front line, Gardener rescues himself and his child from poverty.

Chris Farley's good-natured Tommy Callahan is forced to find new customers for his late father's struggling business and takes off on a cross-country prospecting mission. We watch Tommy morph from a severe case of arrested development into a competent salesperson who rescues his late father's business from bankruptcy.

One of the main takeaways from this film is how exhausting field sales work can get. This is an all-time classic "road trip" comedy that highlights just how much of "the road" Farley and Spade's characters actually have to travel.

Based on Jamie Reidy's nonfiction title Hard Sell: The Evolution of a Viagra Salesman, viewers get a surprisingly detailed look into the hard-nosed field of medical sales. The film tracks Jamie's journey from entry-level pharmaceutical rep to Pfizer’s #1 seller. Viewers watch as Jake Gyllenhaal's character tries to get doctors to prescribe Zoloft instead of Prozac and then finds rapid success once he starts pitching on behalf of newly released Viagra.

Whether you sell newspaper subscriptions, software-as-a-service, or heavy artillery, salespeople have to keep their calm while negotiating the close.

Thank You For Smoking

This is how Nick Naylor describes himself and the viewer starts to believe him after watching him charm talk show audiences, outflank US Senators and seduce print journalists. The narrative hinges on Naylor's ability to communicate a vision, whether it's to a global audience or one-to-one with his son.

Aaron Eckhart plays Nick Naylor, a lobbyist tasked with evangelising Big Tobacco. His primary marketing initiative is to re-invigorate tobacco sales by partnering with Hollywood to feature these products within their movies. The film's narrative watches him as he builds an ecosystem of Hollywood production companies to help him achieve this goal.

3 travelling salesman (1 veteran, 1 schemer and 1 kid) hunt for their prospect, the CEO of a major company, amidst a crowded convention. The length of their quest highlights the extraordinary lengths that sales reps must go to in order to engage the right person.

“It doesn't matter whether you're selling Jesus or Buddha or civil rights or 'How to Make Money in Real Estate With No Money Down.' That doesn't make you a human being; it makes you a marketing rep. If you want to talk to somebody honestly, as a human being, ask him about his kids. Find out what his dreams are — just to find out, for no other reason. Because as soon as you lay your hands on a conversation to steer it, it's not a conversation anymore; it's a pitch. And you're not a human being; you're a marketing rep."

This quintessential data analytics film is sneakily an under-the-radar movie about selling. Billy Bean is one of the first to realize that Bill James' approach to building a sports team is the way of the future. Unfortunately, no one else is on board.

Beane has to sell this vision over and over again to his colleagues who do not want to execute his strategies; to his players who do not understand what he is trying to accomplish; to his superiors who want to fire him and to the Oakland Athletics fans who want his head on a plate. Not only does he have to motivate an obstructionist staff but, as the clip below displays, he needs to persuade the very same statistician that inspired him to adopt the approach,who nonetheless fears the inevitable backlash. Despite these obstructions, he makes it to the playoffs with one of the longest winning streaks in baseball's history.

The psychological interplay between buyer and seller; the internal mechanisms of motivation; entrepreneurial spirit and the will to power; the camaraderie of building the right team; the thrill of human connection -- filmmakers and audiences alike gravitate towards these dynamics. By definition, people are captivated by strong communicators, which is what makes for such compelling narratives. What we've curated here is likely to expand as more stories about sales & marketing get told.

From Mad Men to Death Of A Salesman to Wall Street, we could have made this list even longer. Have we missed anything that is essential to you? Let us know!